I've been using Google Chrome since day one, and since then there has been some big improvements which has lead to an increasing market share. The latest stable version (channel) has the following improvements:

What an update hey? The trend for increased usage of Chrome is definitely going to continue.

Posted by Unknown at 09:46 No comments: Links to this post

Google Sites Gets A Makeover

Google Sites just received a minor makeover. The navigation bar can now be set up as a tree structure and the new editor looks very similar to Google Docs (other minor changes are here). I'm so happy about the addition of this new editor, it creates a level of consistency across the Google Apps suite which is much needed since desktop office suites have been offering this for years. More changes to site navigation will happen in the next few months, along with integration of adsense and collaboration tools. It's nice to see Google adding these features to sites. I've been using it for the past 8 months and it's super at meeting my needs as an educator. My favorite aspect is the integration of Google Docs; documents can be embedded in a site and styled with just a few clicks. This indeed shows the power of cloud computing.

Posted by Unknown at 15:39 No comments: Links to this post

After reading about all the hype of WolframAlpha over the past few days, I decided to give it a try. I tried accessing the site yesterday, but the system couldn't handle all of the requests and it was really slow. I managed to access it last night, and after ~30 minutes I concluded that it is no way a Google killer and that it was definitely over-hyped. I typed in the search term "St. John's Newfoundland population", and it did give the population, but that's it. A Google search gave me the answer plus much more and various videos and images. Interesting enough, I tried a the same search on Wolfram about 10 minutes ago to get the link for this post, but a system error occur. I really think that if your starting a new search engine, it should at least be working. It's going to take a lot to knock the search king/queen, Google, off it's crown. It's the hub of the internet, I use it for email, maps, docs, video, photo sharing, blogging, and on and on... WolframAlpha has potential, and certain groups of users are going to love it, but the general public will keep going back to Google.

Posted by Unknown at 13:36 2 comments: Links to this post

My morning routine at work consists of Gmail, work email, and then Google News. When I checked Google News this morning, it had a different look, and there were some headlines that displayed a YouTube icon. When this was clicked, the YouTube player appeared. This is a super addition, hopefully more YouTube news videos will be included with news stores and the mobile Google News will also be updated.

Posted by Unknown at 12:53 No comments: Links to this post

Google Android just got a great new app, Sky Map. With this app, all you have to do is simply point your Android phone to the sky, and Sky Map will tell you the stars, constellations, and planets. If you are looking for a star/planet, type in the name and Sky Map will tell you how to move your phone to see it. On this note, the phone doesn't actually see the sky, it calculates what you should see based on the gps, compass, accelerometer, and clock, so it will work on clear or cloudy nights or sunny days. This is an amazing app and it really shows the power of the Android OS. 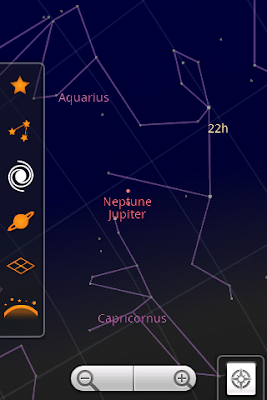 Posted by Unknown at 12:25 No comments: Links to this post

Android is Coming to Canada

There is good news for all of you Canadian Google Android smartphone wanters out there, Android phones will be available on June 2nd!! The carrier will be Rogers, I haven't heard any talk if this is an exclusive deal, hopefully not since Rogers coverage is limited in some provinces (i.e., Newfoundland and Labrador). Rogers will sell two Android phones, the HTC Dream and HTC Magic (the newer one) and both will be running Android 1.5 (aka cupcake) which has features such as YouTube-uploading, better GPS technology, and a faster web browser.
This, along with Bell's announcement of the Palm Pre coming to Canada in the second half of 2009 is great news for the mobile market in Canada. Generally we are really behind the times up here, but things seem to be changing. Hopefully my carrier, Telus, will soon make some sort of big announcement, they seem to be the only Canadian carrier that is not. Maybe I shouldn't have signed a 3 year contract.

Posted by Unknown at 13:01 No comments: Links to this post

I love Gmail, and I really want a Blackberry, this new release by Google Mobile links the two. The release, set for July, is titled Google Apps Connector and it connects the Google cloud with the Blackberry Enterprise server, so it merges Google Apps such as Gmail and Calendar with the Blackberry versions. Users will be notified when new emails arrive, Gmail messages can be archived and starred while in the Blackberry apps and calendars can be synced.
This will be really useful to Blackberry users who love the Blackberry applications. I could see myself using this (if I had a Blackberry), instead of running two applications to check email, it can all be done in one. As Google releases these new features, my desire for a smartphone increases. With my current phone, the LG Dare, I have to load the web browser, find the Gmail bookmark, load the page, and after this I can only use the crappy HTML web version, brutal. I think I'll spend part of the day smartphone shopping.

Posted by Unknown at 12:44 No comments: Links to this post

Just like Gmail, Google Docs forms now have themes. All you have to do is click on the "Theme" button which will lead you to a list of themes ranging from standard color arrangements to flashy designs.

I am so happy they added this feature. I use forms to gather student feedback for the labs that I teach, it's a great way to collect information in an environmentally friendly way (no paper woohoo). The original form theme (there was only one of them) was very dull and boring, now I can make the form more visually appealing which should increase the response percentage. Great feature.
Posted by Unknown at 16:20 No comments: Links to this post