Techcrunch Disrupt happened this past weekend and one of the great startups that showcased their product was Desmos, a free online collaborative tool that's focused on the education sector. I signed up and tried out their web app (offline program also available), the editor is quite good (lots of options), the app is very intuitive and educators can collaborate on a whiteboard (file) in real time. Apps like these are badly needed in the educational world to stop the fragmentation associated with new technology. I will definitely be giving this a try for the Fall 2011 semester. Long-live the cloud!

Posted by Unknown at 13:31 No comments: Links to this post

Life Without Windows: 8 Weeks and Counting

In the past I have dabbled with Ubuntu, 2 months ago I made a more dedicated commitment; transforming my 1.5 yr old Windows 7 laptop into a dual-booting Ubuntu beast. The process was quite easy; download the image, burn it to a disk, restart windows with the disc inserted, and after about 30 minutes and a few clicks, Ubuntu is installed.

Initially I had planned on splitting my computer usage 50:50 between Windows and Ubuntu, it's actually worked out to 99% Ubuntu and 1% Windows (I haven't been in Windows for at least 2 weeks). The switch has been so good that I also changed my work computer and teaching computer to dual boot machines. What am I enjoying about it so far? 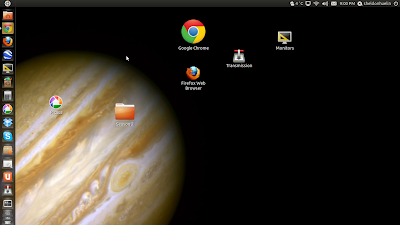 The only negative thing I have encountered is the lack of Netflix support, I use the Wii for this but the video quality is low. Hopefully Chrome will get this support at the same time that Chrome OS does.

So far it has been an excellent 2 months as a part of the Linux world. The learning curve has not been steep, and with the Unity interface, the switch to Ubuntu is even easier. If you haven't tried it yet, give it a shot, you may become hooked!
Posted by Unknown at 13:14 No comments: Links to this post

Chromebook: Will I Buy One?

The Chromebook - Google's version of a notebook that uses the browser as the OS. There is no desktop, no antivirus, no installation of software (web apps), and no annoyingly-long boot times. All of this sounds great, but what if I do need an offline app? As an example, Google Docs works great, but sometimes I need that bit of extra formatting (merging rows in a table) and this is only found in offline office suites such as LibreOffice. Also, computer intensive tasks requiring photo and video editing can be done online, but it's extremely slow and limited (editing photos in Picknik).

Currently, I think the Chromebook will work as a great secondary device. It is built for the web, and it does a great job with it. It will eventually fall into the primary device category, the web hasn't evolved enough to put it there yet.

Posted by Unknown at 17:50 No comments: Links to this post

Here's another reason I love the web: a continuous livestream of a bald eagle nest. With over 100 million views, this is the most watched live streams ever, take that Royal Wedding!


Free live streaming by Ustream
Posted by Unknown at 20:12 No comments: Links to this post